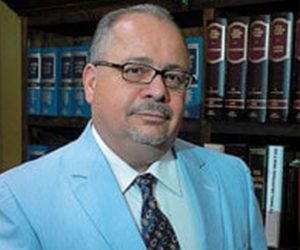 ALBANY — Ralph Scoccimaro’s courtroom demeanor was not forged in some preppy law school. The fiery Hoboken, N.J.-born Italian/Puerto Rican attorney whose passion before a jury has made him as many friends as enemies among his peers and won him the respect, often given grudgingly, of the Southwest Georgia law fraternity is no trust-fund attorney.

#The former high school dropout/Vietnam-era “spook”/Las Vegas craps dealer who wears his affinity for his clients on his sleeve is Grade-A United States Marine Corps made with the requisite “I-can’t-lose” Marine Corps attitude.

#“A lot of what you see from me in the courtroom comes from my time in the Marine Corps,” said Scoccimaro, a partner in the Albany Brown & Scoccimaro P.C. firm. “That’s where they instilled the I-can’t-lose attitude in me. We were taught that we were better than any military force in the world, and that attitude stuck with me. I never quit.

#“When I go into a courtroom to represent a client, that client becomes like a brother or sister to me. I think about what Abraham Lincoln said: ‘A lawyer who doesn’t shed a tear for his client is a liar or should be disbarred.’ I see lawyers lose a case, go home and settle back with a cocktail like nothing happened. Man, when I lose a case, I grieve for my clients.”

#Scoccimaro cut his teeth with the Misdemeanor Defense Group in San Diego, where he watched courtroom superstars like Melvin Belli and famed mob mouthpiece Oscar Goodman, now the mayor of Las Vegas, practice their trade. He came to Georgia with a $500 gift from his former boss and the clothes on his back and built his reputation as a people’s champion doing legal work for migrant farm workers.

#“Talk about adventurous,” Scoccimaro, 55, said of his time with Georgia Legal Services in Tifton. “I was working with preppy types from Yale and Duke and all these other idealistic left-wingers, and we’d go out on the farms and tell workers about the Agriculture Workers Protection Act, which is like OSHA for farm workers.

#“I remember once we were talking with a group of workers and we heard a big roar from a pickup coming down the dirt road to the trailer where we were. The man in the passenger’s seat weighed about 400 pounds and he was holding a shotgun.”

#“This old farmer’s about 70, and he says ‘What y’all want’?” Scoccimaro says. “We say, ‘We’re lawyers telling these people their rights,’ and the guy says (again with the Southern accent) ‘They know their rights … You folks go on now.”

#Growing up in the shadow of the New York City skyline in New Jersey, Ralph Onofrio Scoccimaro’s boyhood was very much “like Norman Rockwell.” He, his brothers and their friends would leave the house at 8 in the morning and not return home until dark. Their adventures often included a 35-cent bus ride that took them into New York City to visit such landmarks as the Empire State Building, the Port Authority and Central Park.

#Scoccimaro’s father, Giuseppe, came to America from Italy, and he met his future Puerto Rican wife, Matilde, at the Copa Cabana. The culture clash made life in the ’50s and ’60s interesting for Mario, Joseph, Onofrio and Rose Mary Scoccimaro.

#“We were a walking ‘West Side Story,'” Scoccimaro laughs.

#The family moved to Hialeah, Fla., when Scoccimaro was 14 — “We went from four-part harmony on the street corners to ‘Flipper’,” he quips. — and he started work at his mechanic father’s Exxon station. He worked there until, after being suspended from school for getting into a scuffle when someone sat on his motorcycle, he decided to join the Army.

#“I went to see the Army recruiter because I wanted to be an Airborne Trooper,” Scoccimaro said. “But the guy was out to lunch, and the Marine recruiter next door told us ‘If you boys want to be in a tough service, you need to come in here.’ Of course that worked.

#“Since I was only 17, I had to get my parents’ signature. My dad signed right away, but it took three days to convince my mom. She wanted me to finish school.”

#What followed was “right out of that movie ‘Full Metal Jacket,’ ” according to Scoccimaro, who after “regretting every minute at Parris Island,” received orders to report to Naval Security Group Activity in Pensacola, Fla. There, he learned to decipher diplomatic cable code.

#“I got my orders, and my sergeant said ‘You’re going to be a spook,’ ” Scoccimaro said. “I found out quickly that we were intercepting the communications of everybody, friend and enemy. I asked why, and I was told, ‘In God we trust, but we copy you, too.’ “

#Scoccimaro spent his tour on the West Coast and primarily in Okinawa, intercepting sensitive communications. He was privy to some of the most classified intelligence information gathered during the era, including bombing raid targets and casualties during the escalation of the Vietnam War.

#“Very few people are aware how close we’ve come to nuclear holocaust over the years,” he said while remembering his intelligence work. “During the Arab-Israeli conflict in ’73 the entire U.S. world military force was activated and we moved to DefCon II. In fact, after Flight 007 was shot down (over the Kamchatka Peninsula above North Korea in ’84), President Reagan had us involved in war games in Germany. Russian intelligence thought it was real, and they gave the orders to launch nuclear missiles.

#“We’re all here today because someone disobeyed those orders.”

#Scoccimaro was recruited for the CIA after he opted out of the Marines, but he instead went to Vegas to learn the art of craps dealing. His “juice” in Sin City, a “fat, Jewish guy named Levy,” died before Scoccimaro made it to the strip, so he took a 180 turn and decided to head to law school. After being put on waiting lists at Boston College and the University of Puget Sound, he went west to San Diego and enrolled at Western State University.

#“When the Vegas thing fell through, I really had no plan,” Scoccimaro said. “I knew I didn’t want to work at my dad’s Exxon station the rest of my life, and my father’s family — and I don’t know if it’s this way with all ethnic groups — but they had a huge respect for lawyers.”

#He worked his way through school and took the California bar exam, but the dog-eat-dog pace didn’t set well with Scoccimaro and his new wife, whose parents owned a farm in Worth County’s Poulan community. The couple came to South Georgia, and when Scoccimaro saw an ad seeking a bilingual paralegal, he applied and was hired by Georgia Legal Services.

#He eventually planned to move back to California, but when a side trip to New York resulted in the theft of his car, that move became impractical. He took and passed the Georgia bar and in 1985 moved to Albany to practice consumer protection law with a man who would become his mentor, current Dougherty Superior Court Chief Judge Willie Lockette.

#“He was hated by a lot of the established lawyers, but Willie Lockette was the counterweight to their supremacy,” Scoccimaro said. “I learned a great deal about law from him.”

#Scoccimaro eventually went into private practice with fellow Western State grad Fred Tobin, and in 1988 he and current partner Jimmie Brown teamed with Randy Phillips to form Brown, Phillips & Scoccimaro. Phillips left a short while later, but the two remaining partners maintained a practice that will have lasted 22 years in October.

#“What makes our partnership work so well is that Ralph and I frequently have completely opposite viewpoints,” Brown said. “I love him like a brother, but we are political opposites. That serves us well when we’re in court, especially when we work on more high-profile cases together.

#“I’m more analytical, and Ralph is more emotionally driven. He’s probably the most passionate lawyer I know. He will not hesitate to stick his own neck out if it will help his client. And the man doesn’t back off, no matter who the defendant is. Some of his best work has come in cases when we’ve taken on the big boys: federal, state and local governments, hospitals, large corporations.”

#Brown’s not the only one who’s noticed Scoccimaro’s passion on his clients’ behalf.

#“There are three things about Ralph: He’s very zealous about representing his clients; he uses good common sense, and if he tells me something I know I can take it to the bank,” Albany attorney Bill Hedrick said. “We’ve opposed each other many times, and he works hard to resolve a case without it becoming contentious to his client’s detriment.

#“A lot of young lawyers now come out of law school wrapped so tight they have a lot of zeal. Ralph has that same zeal, but he has maintained his sense of humor. I think that’s important.”

#You want zeal? Not long after he went into private practice, Scoccimaro found himself staring into the barrel of a shotgun. He’d told a repo man to take a client’s car down from his tow truck, and the repo man responded with a racked 12-gauge.

#“I just stared at him and told him if he pulled the trigger he would go to the electric chair,” Scoccimaro said. “He eventually got in his vehicle and drove off, but when I told my assistant to take out an arrest warrant against the guy, (current Dougherty Police Chief) Don Cheek wouldn’t give us a warrant. I never forgot that.”

#Scoccimaro scored one of his most memorable victories when he took on “five D.C. and New York lawyers” attempting to keep a Yale-educated Cuban emigre who “did my mother’s nails” from being granted a visa because she was involved in the Cuba-America Foundation, which they argued was a pro-communist organization.

#The accomplished attorney also had a verdict returned “five minutes after the jury left the room” in the case of an Albany policewoman whose estranged husband said she had abused their daughter because she spanked the “fair-skinned 8-year-old” with her hand and left an imprint. The child was holding a knife to her younger brother’s stomach at the time.

#“I told the jury what the child needed was a good old-fashioned spanking,” Scoccimaro said.

#Because he’s not what he calls “one of the new centurion lawyers who come out of law school not knowing what it’s like to go hungry or get their hands dirty,” Ralph Soccimaro is not everyone’s favorite practicing attorney. Not that that upsets him much.

#“Some of the lawyers around here bad-mouth me,” he says, “and some of them say good things. The ones who’ve led pampered, sheltered lives, I’ll usually have problems with them. They see law practice as competition — like the basketball teams they played on in high school — as something to win.

#“I see law far differently. I see it as an opportunity to help families that have been shattered, families that are going to be persecuted no matter what they do. I’ve been there with them; I’ve worked all my life to get where I am. I draw from my background, my family life, my service in the Marine Corps in defending them. My fire comes from that.”